Our baby's are here from "Artic"  Am Ch. Wistwin Primo Artic, Alexis had 4 beautiful babies,2 blue girls, 1 blue boy and one tri boy.
They were born on October 4th. 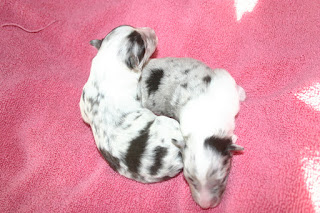 This is the 2 girls, they are so cute! 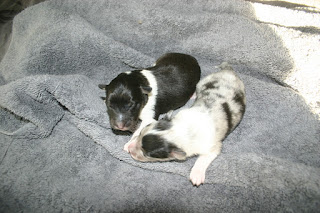 And the boys!
Posted by Cassbar Shelties at 10:57 No comments:

Where did the summer go!

We have had a great fall.  The weather has been gorgeous with only a few days dipping below zero overnight.   Cant complain about that!  No bugs and no cold!

The dog scene is finally slowing down, shows are over with just the Brandon show left for the year local.
Alexis has new babies on the ground, they are 9 days old today!  Eyes should be open soon.  We have 2 Blue girls! 1 Blue boy and a Tri boy.   Everyone is healthy and happy!  Cant ask for anything more.

We've had a ton of things happening threw the past few weeks.   Have to first off congratulate Jeff Mortenson on him & Dart's accomplishments in Agility in Canada & the US! 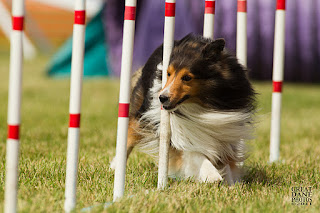 We have a few oldies still out there competing in Agility.  Carla & Rory are still playing!  He would be almost 13 i think?  WOW.  Carla's says that he is fine to run agility but cannot do a course in the late afternoon, that can coincide with this NAP TIME!  ;)  Love it

Plese do update me with Titles & Photo's.

We've had a Few new Champions in the last few weeks also!   "Lyric" My RED RED sable girl from Kensil Shelties is now a new CH!  She finished up her title from the 9-12 puppy class!  New Ch. Kensil's Lyrical World at Cassbar


Also from BC, Renee Hughes and her "Quick"  (Miley x Robin) went out to do some work in Conformation, thinking she was a bit naked, but why not get some experience, cleaned up and finished Quick's Championship with one Winners female and 2 Best of Winners!  What a weekend the two of them have had!  Onto bigger and better stuff right Renee!  New Ch. Cassbar's Agile Quick Step 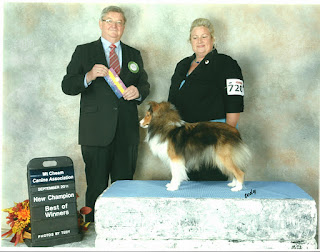 Here in Manitoba, Claudia Proctor was working with her Alexis Baby "Rafiki" he was at 6 points already from the Junior puppy class going into the Thanksgiving weekend, Fort Garry Shows.   Well the team did awesome, taking Winners Dog x 2 to finish up his Ch!  Congrats you two you looked awesome!  New Ch. Cassbar's Circle of Life. 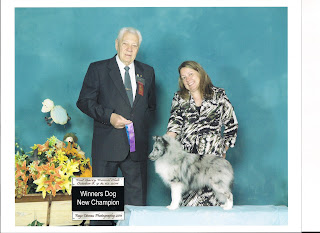 I had entered a couple days also, with Bean & Jackson.   My little Bean thought she  deserved some of the spotlight also (Rafi's sister) and she went Reserve the first day and Best of Winners the second day of shows to put her at 5 points!  Half way there! 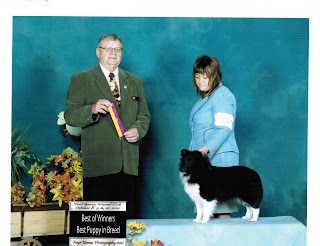 These 2 babies are from Alexis & Nemo's litter, just 7months old, Rafiki is now the first Can Ch. for Nemo!
heres a shot of them both winning at MCA shows in August 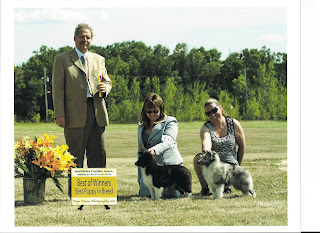 "Jackson" Got to come out and play a bit, and on Monday took a Group 4th in a lovely line up, just being a baby, we are very thrilled with how he's maturing!
Posted by Cassbar Shelties at 11:47 No comments: