So we had our Vegas trip, and came home to start the show season here.  I had Lyric in her first show just to get her out on mats, and she did really well, took some reserves.   We then had a US show to go to, Willow still needs her last point for her American Championship, but she managed to dump every last hair on her body, but we went anyway.  Both her and Jackson picked up Reserve Winners from the show, so we came home with no points, but we had some great shopping Kara & I.  : )
We have a few puppies out or young adults all going at the same time.  Of course Jackson as a Special.  Presley who has 4 points as of the end of May.    But another boy owned by Summer Armitt, "Harley" has been out with her exclusively.   "Harely" is out of our Miley who just fnished her Ch in March.  Harely and Summer played in a few Shows this summer and at Portage show on the long weekend of July he is now a NEW Champion Cassbar's High Performance.  His sire is "Robin" Ch. Skyehaven Rockin Robin HT, owned by a good friend Paula Reid, and that is the  first Champion Offspring for both Sire and Dam.  CONGRATS SUMMER & HARLEY! 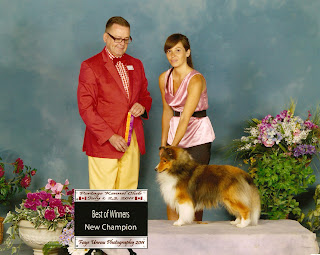 Posted by Cassbar Shelties at 18:25