The young Pups at shows!

We have had some huge win's with the puppers.  Firstly, Baby "Kane" went to 2 days of the show in Kenora Ontario, he was just 6 months old and a few days.  His first day in the ring he went with his best Bud Leanne Maciver to be shown to Denise Cornelssen breeder/Judge.  His first Day he went onto getting Winners Dog and his First Best Puppy in Group!  Thank you both to Leanne & to Denise for this lovely win.
Second day i joined them in Kenora and we had a great day getting another 2 wins that day for BOW putting him on 5 points first weekend out! thank you to Judge Bart Miller 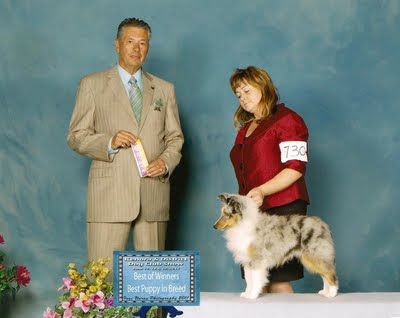 We had entered ALL 3 puppies in Thunder Bay Ontario the next weekend.  So off i went with 3 puppies, and Jackson to the shows.   I travelled up with Connie Krohn and was it a busy weekend for both of us!
Kane came away with another BPIG and to finish his Championship at 6 months and 10 days old under Breeder/Judge Mark McMillan 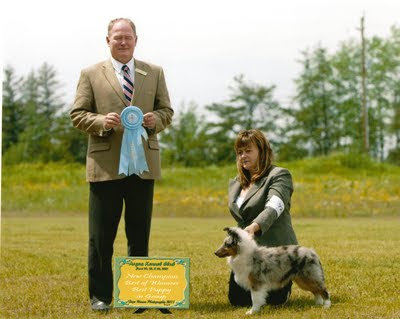 MULTI BPIG NEW CHAMPION AMANCHARA PROTOTYPE
We also put many points on the girls i had with me also.  "Lyric" Kensil's Lyrical World at Cassbar is close to finishing her Championship.  Here is a Picture of her BOW with Judge Mary White 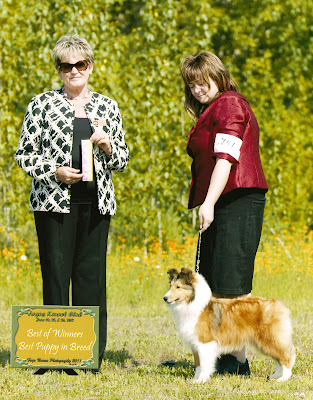 "Presley" has also had some lovely win's including a Reserve WB at the Thunder Bay Specialty, she is now close to finishing, and this was a lovely win with Judge Jack Kilgour.   Kane had also won BOW/Best of Oppostite, Best Puppy In Group under Jack Kilgour that day.  Thank you for the lovely wins. 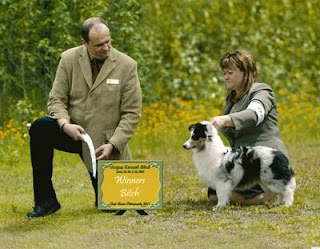 Jackson didn't get to be shown as i was so busy with the puppies, but we did get a win in that weekend, a Breed win and A group 2nd for our bratty Special.  He's so much fun to show, cant wait till he is more mature and we can play more.
Posted by Cassbar Shelties at 19:11